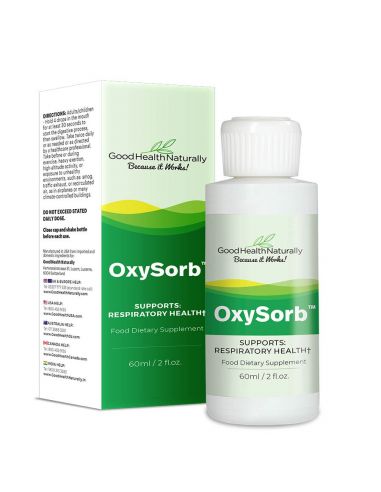 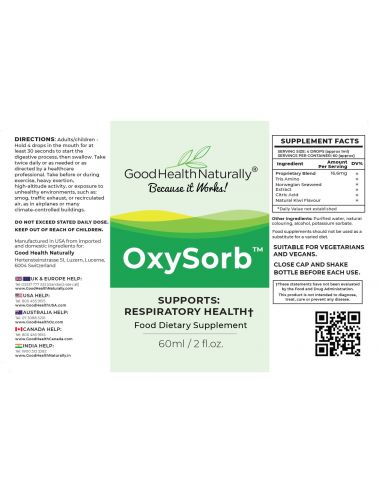 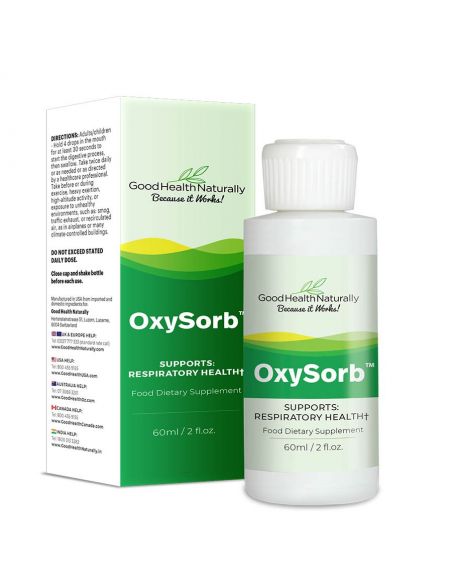 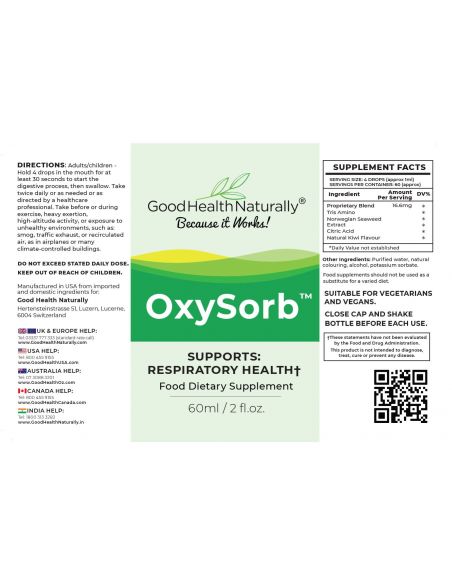 OxySorb™ is a powerful sublingual liquid enzyme extracted from deep water seaweed that is formulated to, when taken under the tongue, improve your body’s ability to absorb more oxygen. A small amount of OxySorb™ may help the lungs to get rid of a large amount of waste gases.

OxySorb, is a unique natural oxygen-enhancing compound that aims to support the respiratory system and may improve lung health, by assisting more oxygen to enter the bloodstream with each breath. Take before or during exercise, heavy exertion, high altitude activity or exposure to unhealthy environments such as smog, traffic exhaust or re-circulated air as in airplanes or in many climate controlled buildings.

OxySorb™ is prepared for maximum oral absorption by inclusion of naturally occurring plant extracts that neutralise the digestive effect of saliva while it’s held in the mouth. Thousands of Oximeter tests have demonstrated that the amount of oxygen in the bloodstream can be increased in less than a minute after OxySorb™ is taken. Its action is easy to understand, when you realise that there’s only a certain amount of haemoglobin (the type of cells which transport gases) in the body.

These cells load up with oxygen (and the other gases that you’ve just breathed in) as they pass through the lungs. On their trip through the body, they drop off oxygen and pick up more waste gases that are typically but not exclusively carbon monoxide (CO) and carbon dioxide (CO2). When they get back to the lungs, the waste gases must be exhaled, so the haemoglobin can be loaded with more oxygen (and the cycle can start over). OxySorb™ is extracted from Norwegian seaweed, which has to produce oxygen from CO2 in low temperature and virtual darkness. (That’s a much more difficult task than plants usually face, since their chlorophyll usually is aided by warmth and adequate sunlight!)

OxySorb™ is a blessing for persons who need more oxygen due to reduced oxygen in the local air (because of high altitude or pollution, during jet travel, and when in a sealed building or when trapped in traffic); or because of increased demands (common when doing heavy physical labour, or for athletes in training and in competition). By using sublingual technology already pioneered in other areas, a version of the seaweed that is absorbed in the mouth has a dramatic effect on the oxygen levels of the blood – and it acts quickly.
1113
No reviews
Tap to zoom

Good Heath Naturally uses cookies to improve your experience on our site, site performance, facilitate social media sharing and offer messages and advertising tailored to your interests. By continuing to use our site you consent to the use of cookies. For more information see our Privacy & Cookie Policy.